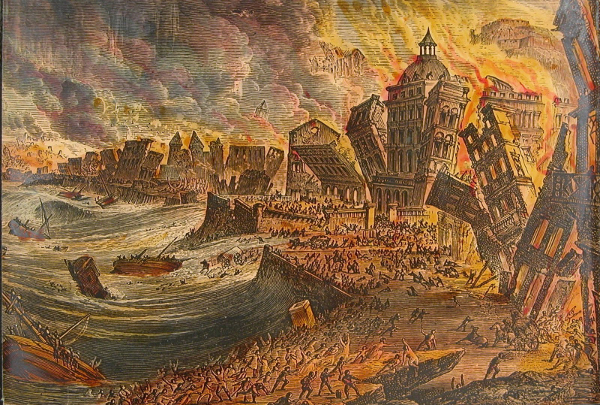 After the earthquake had destroyed three-fourths of Lisbon, the sages of that country could think of no means more effectual to prevent utter ruin than to give the people a beautiful auto-da-fé; for it had been decided...that the burning of a few people alive by a slow fire, and with great ceremony, is an infallible secret to hinder the earth from quaking.

the great lisbon earthquake of 1755 plays a role in voltaire's "candide", setting the backdrop of a devastated city at the edge of madness, burning men at the stakes to avoid another cataclysmic natural disaster. that earthquake is mostly forgotten these days but it took the lives of hundreds. interestingly enough, most of those deaths occurred about fourteen minutes after the earthquake first hit.

lisbon, a port city in portgual, was hit by a tremendous earthquake. the result of the massive tectonic shift was that the tides receded, pulling back from the shore an unprecedented level.

people gathered at the city's docks and saw, for the first time ever, the muddy ocean floor that went out a kilometer or so from the shoreline. among the items they could see treasure's long forgotten: gold, weapons, skeletons, and more. many ventured out not knowing of the incoming tsunami that would soon hit.

and hit it did. fourteen minutes later to be exact. the tides that had receded returned and washed not only the treasure but the curious living.