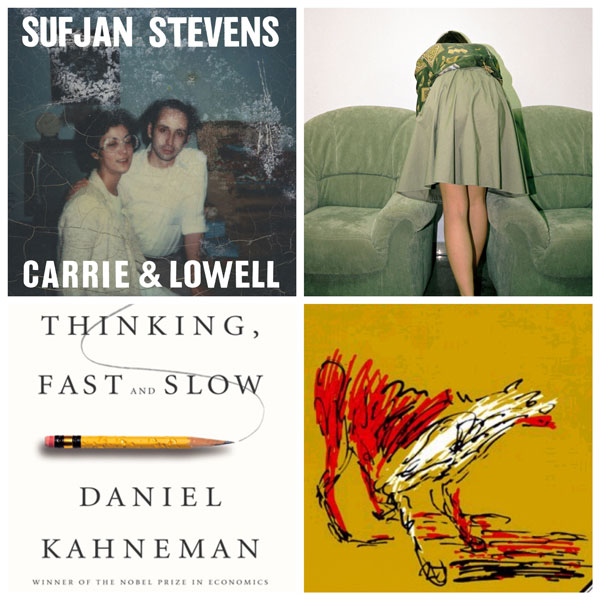 the sound is sucked out of the room. all great crests herald terrible valleys and here the paragon of american maximilism is left shellshocked at his estranged mother's death. with integrity and impeccable narrative prowess we move through a dialogue stitched seemingly together from memories. but the truth is that neither the forgiving child nor consoling mother exist in the moment-- these are not flashbacks. this is a moment between ghosts. and ghosts have nothing to fear and nothing to hide.

the machine beat drips slowly, the steady drip of chemo poison unravels in the blood. a haunting voice. lingering synths. reverb's echo. all these elements merge and give rise to catharsis amidst resignation, and perhaps, even more, a sense of dignity to it all.

there is a reason this psychologist won the nobel prize for economics. this engaging book presents a compelling case for the rational, somber mind as anything but. scores of examples reveal how our ability to judge, scale, and forecast are all biased disastrously in predictably irrational ways. at the surface it is a trove of curious insights, but upon reflection we are left with questions about the troubling implications, and worse yet, a newfound understanding that our mind is an uncalibrated instrument incapable of answering them.

as a child of a border town, i reflect often on the idea of culture and nationalism. if i had to begin a conversation on latin american culture with one word it would be "baroque", a culture in-stasis by a partial birth, marooned from history for centuries, the last vestiges of a by-gone century. latin culture, language, architecture, religion, art, and even familial relationships all share in this common thread of pageantry and excess. everything is colorful. everything is elaborate. everything is life. even death.

but in the mid 20th century that began to change and this book sits at the inflection. juan rulfo's novella of a man who returns to his mother's literal ghost town is a beautiful work that is uniquely latin. the product of a culture simmering and ready to breathe. the themes, the people, the very motivations are familiar of romantic baroque heroes-- but the mechanics, the nagging doubts and hopes of its characters all pull elsewhere, tearing from within into a new style, birthing a new era of latin american identity. you can feel the warmth of a new dawn rise from this ghost story. compare with edgar lee master's approach to "spoon river anthology" and there alone you have a raison d'etre. the cold puritan steel vs the white hot hispanic forge.

for me, "cien años de soledad" is the titan of spanish literature that will be remembered for lifetimes to come. here we witness the fever dream that inspired it.