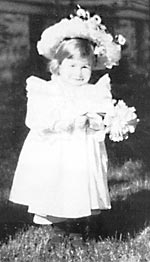 as was popular at the time, ernest hemingway's mother would dress the young boy in girl's clothes in a practice known as 'breeching.' however, she would go a bit farther and match his sister's dresses (pretend they were twins) and refer to the boy as 'ernestine.'

this was the same mother who sent news of her husband's suicide alongside the revolver used to the young teenage ernest.